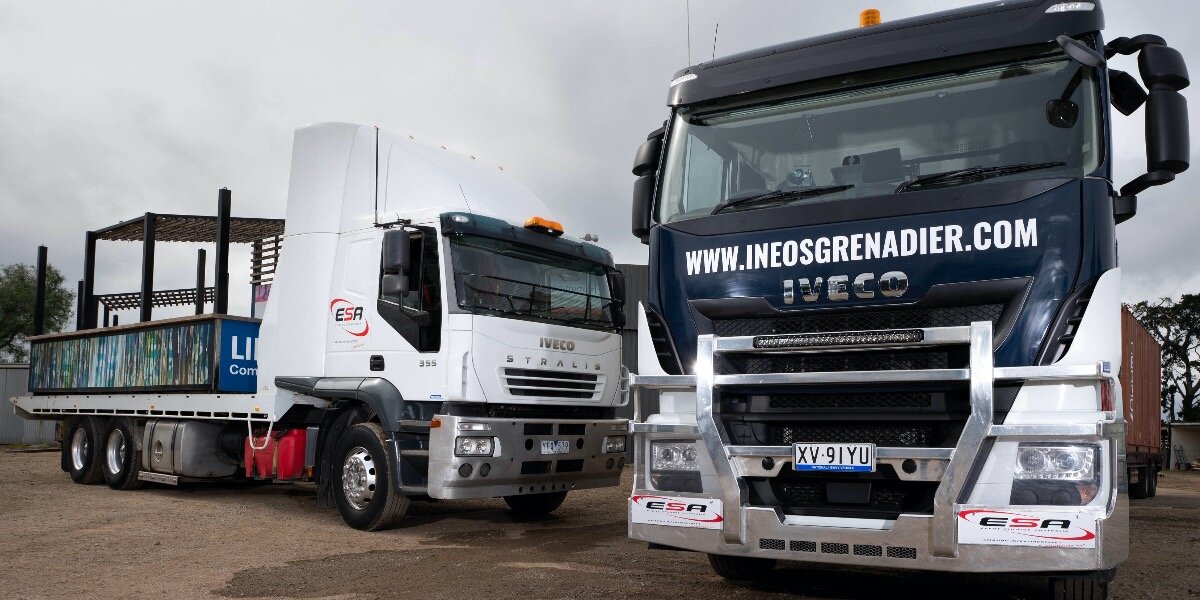 The truck joins a trusty, long-serving Stralis AT rigid which is showing over 1 million kilometres, and while some operators would have chosen to replace it by now, ESA Proprietor John Keeble, said the Stralis had provided 12 years of issue-free service and was still going strong.

“The Stralis has been a fantastic truck that has done everything we’ve asked of it and more,” John said.

“It’s been all around Australia and worked in some tough conditions, often operating close to maximum capacity and towing a bogie dog trailer, so it hasn’t had an easy life.”

John has been involved in the staging and event hire industry for most of his working life and began ESA in 2003 when he identified a gap in the market.

At the time, marquees were the prominent portable structures being used across the events industry and although they served a purpose, John saw an opportunity to develop a more solid modular structure. He progressed the idea and soon gained interest, including from the Victorian Racing Club who placed a major order for double story steel modular buildings to create the winning post at Flemington.

These new structures pioneered a move away from marquee set-ups at major events, and in the following years ESA grew considerably and expanded its services to include portable bars, mini pods, actuating structures, pergolas and archways, and home office pods. ESA now services many major clients customising structures to suit their requirements.

It’s ESA’s growing service offerings which was the catalyst for an extra truck, and based on the outstanding performance of the Stralis, John felt there was no need to look beyond IVECO in selecting a new workhorse.

While the X-Way features an 8x4 configuration and 510hp Euro6 engine compared to the Stralis’ 6x2 set-up and 355hp powerplant, John can see how the new X-Way has taken all the core benefits of the Stralis such as performance, comfort and ease of use, and set them to new levels.

“The Stralis was always a comfortable and easy-to-use truck, but the X-Way is outstanding in these areas – the in-cabin noise is 100 per cent better, the dashboard layout and instrument cluster is intuitive with everything falling to hand and the seating – both driver and passenger – is super comfortable. The sleeping compartment is also well appointed, it means that even after a long journey we get out of the truck feeling refreshed.” he said.

The evolution of the driveline has also been well received by John, who often still drives the trucks to events himself.

“The X-Way obviously has a lot more grunt and the engine brake is also very good, giving us secure braking when we’re heavily loaded,” he said.

“And the Automated Manual Transmission shifts quickly through the gears and provides the versatility to be driven in auto mode which optimises fuel efficiency, or in manual mode which gives more control to hold gears such as when we’re climbing hills.

“We drove to Sydney recently and found that with the X-Way we shaved around 30 minutes on the trip compared to driving the Stralis.”

Currently being used as part of the new Ineos Grenadier 4x4 activation program, the X-Way has been wrapped in Grenadier livery for added visual impact and is travelling widely throughout Australia, including an upcoming trip across the Nullarbor to Perth.

John said that the X-Way’s many safety features provided he and his drivers with added reassurance, particularly on longer journeys.

“The X-Way offers a lot of safety equipment including Adaptive Cruise Control and Advanced Emergency Braking, but the one I notice the most is the Lane Departure Warning System, it works really well,” he said.

“Given the high kilometers we travel it’s good to know these features are there if we need them.”